4 Cloud Computing Trends Signaling the Growth of the Edge

Imagine an autonomous car needing to turn left or right at a busy intersection. What powers this car – as much as its engine – is a two-way high-velocity data exchange; a “conversation” between the car's on-board computer and the network it connects to. Any turn the vehicle makes is a dynamic decision that needs to be made quickly, based on shifting traffic patterns and road closures.

High-velocity data exchanges like this happen in the billions of IoT devices proliferating around the globe. And these networked IoT devices won’t just send data – they'll also need to receive instructions for adapting to changing contexts. These high-velocity, two-way conversations are the next generation of computing.

We’re shifting from a one-way consumption model of data distribution to a more “conversational” model. But how do we get from here to there?

Why edge computing? Why now?

Edge computing is growing today because it supports the evolving need for two-way, faster data exchanges. There are 5 billion edge devices in use today, with a projected 150 billion on the market by 2025. By 2030, the capital expenditure (CAPEX) on edge is projected to reach $700 billion. As more demand for faster data distribution and reduced latency become obvious, so does the value of the edge.

Indicators of growth in the edge

Intricately data has uncovered four clear signals that the edge will increasingly facilitate the future of computing, a future marked by more devices, more need for speed in data distribution, and more continuous two-way “conversations” rather than one-way data consumption.

Points of presence, according to the Network Encyclopedia, “consist of the high-speed telecommunications equipment and technologies that enable users to connect to the Internet via their ISP. The PoP might include call aggregators, modem banks, routers, and high-speed Asynchronous Transfer Mode (ATM) switches.” 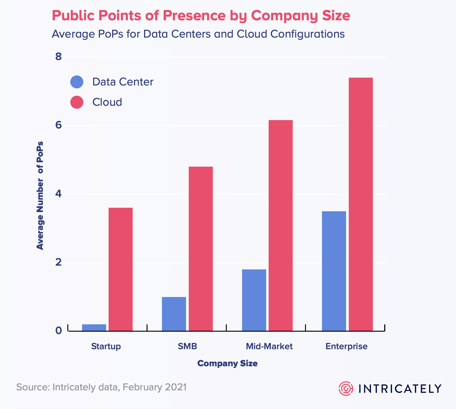 The growing number of PoPs represents a leading indicator that companies have begun decentralizing their cloud offerings and are increasingly moving infrastructure closer to users, for all the reasons we’ve described above: more access, a need for speed, and reduced latency.

2. Content delivery growth is evident across all sizes of business

Content Delivery Networks (CDNs) are geographically distributed networks of servers and their data centers that push out massive amounts of data to users rapidly by – you guessed it – being closer in proximity to users and their devices.

The regional distribution of CDN buyers indicates another important trend signaling the global move towards Edge computing. While about 750,000 CDN buyers are located in North America, a far larger number (1.25 million) are outside of North America, with EMEA having 668,000 buyers, Asia-Pacific having 464,000 and Latin America with 118,000.

A hybrid cloud is a computing infrastructure that combines an on-premises data center (also called a private cloud) with a public cloud, allowing data and applications to be shared between them. Hybridization aligns closely to company size, according to Intricately research.

In terms of the percentage of applications hosted by environment type, hybrid cloud hosts 8% of apps for small businesses, 22% for middle market businesses (versus 17% for data centers), and 31% for enterprises (versus 16% for data centers). The rise of hybridization in mid-market and enterprise companies means that even the largest, most established organizations are moving closer to the edge.

Three Industries Poised for Growth in the Edge
Edge computing is growing because it serves a real and expanding need: users (and the companies that serve users) are demanding more data and higher speeds of data distribution. Let’s look at some of the industries and companies that truly understand the rise of edge computing, and are deploying it to create better customer experiences.

The 10,000 APAC Businesses Representing a Huge Opportunity for Cloud Providers
Across the five leading APAC cloud markets, there are nearly 10K companies spending approximately up to $500K per month on cloud services. Using Intricately data, we examine two of these companies and their current cloud adoption, usage, and spend.