While sheltered at home due to COVID-19, people across the globe shifted their school, work, and entertainment online—causing a surge of 50-70% in internet traffic. With increased internet consumption, Content Delivery Networks (CDNs) are needed to deliver content to end-users quickly and securely.

CDNs help provide fast internet connection all over the world by storing cached versions of internet content in multiple locations. They deliver more than half of the world’s internet traffic. With the rise in internet consumption in 2020, CDNs are in demand more than ever.

For more insights and trends on the CDN market, download our 2020 CDN Market Report.

Consumers were increasing their content consumption before COVID-19—the pandemic accelerated this trend.

Since March 2020, consumer and business content consumption has seen increases in the following sectors:

With these changes, there are four major beneficiaries of increased content consumption.

The number of Twitter conversations between mid-March and the beginning of June mentioning COVID-19 was nearly forty times greater than between January and March. With more time away from friends and family, internet users rely on social media to bring them closer together and to stay up to date.

Messaging app usage has increased —Facebook reported that messaging across its app platforms saw an increase of up to 50% in some countries. To handle this sudden surge in traffic, Facebook relies on its own FB CDN.

Streaming grew by one billion hours across devices between March and May 2020.

More than 56% of Americans said that they streamed more content due to the pandemic, and it makes sense. With no time spent commuting, eating out, or attending social events, Americans simply have more time to spend on their favorite shows.

Outside of the US, streaming also increased across platforms. Globally, Netflix saw almost double the number of new accounts created in the first three months of the year than past years.

An Adobe report announced that total online spending hit $82.5 billion in May 2020, up 77% year-over-year. “According to our data, it would’ve taken between 4 and 6 years to get to the levels that we saw in May if the growth continued at the same levels it was at for the past few years,” explained Vivek Pandya, Adobe’s Digital Insights Manager.

In the past, eCommerce stores have used CDNs to ensure quick content delivery—but especially during times of heavy and unexpected traffic. Times like Black Friday, holiday shopping or after running a huge campaign demand a CDN to keep traffic running smoothly.

This type of increase requires additional CDN support for eCommerce brands, especially those who quickly pivoted their businesses online.

The number of gamers who said they played more video games due to COVID-19 steadily increased week-over-week since March. One Statista survey found that as early as March, American gamers reported playing games 45% more than they did pre-COVID, specifically because of the pandemic.

Daily Twitch viewership in the U.S. more than doubled in the first quarter of 2020, and by May, game sales were up 52% from the previous year. “It’s fair to say that video games are having a moment right now—a unique and extraordinary time by any measure,” said Stanley Pierre-Louis, chief executive of the Entertainment Software Assn.

Online games are another type of content that demand consistent speed and connection, once again requiring CDN deployment.

What it means for the global CDN market

Individuals holed up in areas affected by COVID-19 sought out internet-based services for business and recreation. This increase in demand necessitated CDN vendors to deliver content to users as quickly as possible.

Analysts predict the global CDN market to reach over $22.1 billion by 2024. Currently, there are over 2.1 million CDN buyers of all sizes around the world. 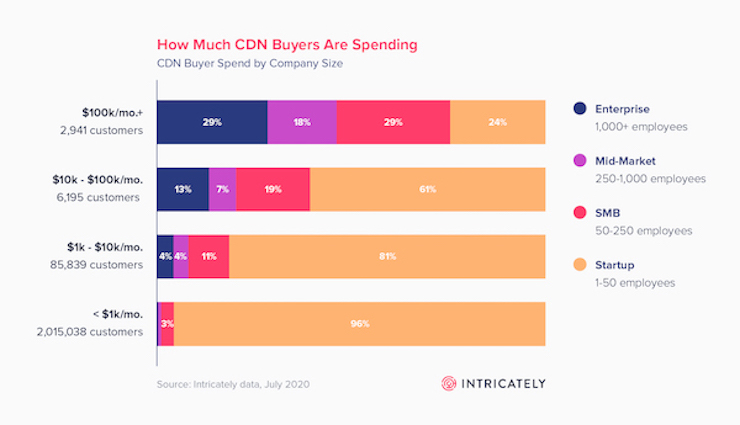 As online publishers, companies, and developers deliver more content, it is expected that the number of CDN buyers will only rise. Additionally, buyers will use multiple CDNs deployed around the world and with different specializations.

For more insights and trends on the CDN market, download our 2020 CDN Market Report.

The Top Competitive Intelligence Tools to Guide your 2021 Go-To-Market Strategy
Let's dive into the competitive intelligence tools that offer valuable insights to decision-makers who want to stay ahead of the curve in 2021.
Read on